Firme Style: More Reflection's of the Past.

I didn't learn about the mechanics of art making in college or any other formal training for that matter. I learned the hard way, on my own experimenting and making mistakes. Discovering which mistakes were the right ones to keep. Trial and error. I always rebelled against school even in elementary. Although, in third grade I once received an award for best penmanship. I believe that incident was the dawning of a life long era of artistry for me. Just knowing that I had good penmanship would one day give me the confidence and courage to pick up a pencil and believe in myself far beyond the stick figure. It's such a common thing to hear people say they can't draw a lick, only stick figures. The incredible part about that is I too was once a stick figure only person. I think what brought me out of that thought and into this new realm I currently reside in was thinking outside the box. It wasn't until then did I actually believe I could produce anything other than the stick figure.

My thing when I was a teenager was writing in big cursive lettering. Adrianne Loves So and So. For example: 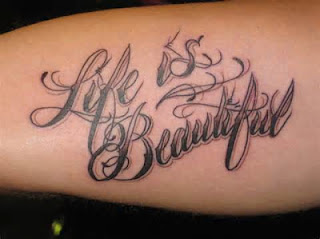 In terms of being a self-taught artist, practicing writing in fancy firme style I like to call it was like putting myself through self-taught art pre-school. When I got into Kindergarten and 1st grade I had moved on to drawing stuff out of the tattoo magazine like a 40's style girl, skulls and ice cream cones. Discovering paints and brushes kinda sent me into my own home schooling which didn't come with instructions and unfortunately didn't come very naturally. Over the years got better and better at it and here I am. I went back and forth from painting to drawing to graphic art (my first love) then to dj mixing (my 2nd love) back to painting which led me to my first art show in 2010. I spent most of all 2011 drawing using markers on bristol paper, creating pieces like "Help Me Help You" which was featured in May's issue of Catapult Magazine here. In 2012 I decided to come back to the canvas. I think using photoshop helped me in a subconscious way when I finally did return to the canvas. This year in 2013 I've decided to take a painting course at The Palos Verdes Art Center for obvious reasons. I need it. I love it. I'm really shocked at how much I've developed on my own taking risks but most of all believing in myself. I can only imagine the possibility of it stemming from getting that award in third grade. Or maybe it was the way I did my makeup firme style everyday as a teenager, eye-lining the cat eye look required me to have a steady hand and lots of patience, but boy was I determined! Perhaps it was the fashion phenomena my sister introduced me to or the fashion sketches I discovered at the age of 24 which made me stop and think to myself, "Hey I can do this, this can be done". Last but certainly not least I might of kicked off my artistry because of the big box of watercolors, brushes and various other art supplies I happened to stumble upon one morning, hey no one was around to claim it so it was mine for the taking. The thing is after that incident took place doing artwork wasn't something I ever doubted or questioned. I knew it was what the universe wanted me to do in life. Like the universe had figured it out for me and all I had to do was pick up what it was trying to throw down. I feel I put myself in a position that lined me up with this reality. Prior to all of this I was an accountant's assistant. I remember feeling that uneasy feeling at my desk and in traffic and it would crawl up my spine like a vine would crawl up a wall. The most compelling feeling I had and I couldn't figure it out but I knew that what I was doing with my time was wrong. Sure my parents were happy with me and sure I had a little money in my pocket but I always felt wrong about the work I was doing. Accounting can sometimes be a lonely, isolated and boring way to spends one's life. I mean when I think back to my childhood and what it was I was good at in life or I always hear the term "use what you know", so with that said what I was good at certainly wasn't math. I failed math. Plus crunching numbers was starting to make me feel like Here's Johnny in the movie The Shining. I can honestly say the best part of junior high was when a kid came up to me and asked me, "Hey, I heard you got bad ass handwriting, can you write my name firme style?"

The moral of my story is this. It's not my intention to influence anyone to quit their day job and start finding your inner peace or anything like that. I discovered I was an artist during a very difficult time in my life and I probably didn't go about things the right way at that time. It's just the way it happened. My message is simple. Go beyond the stick figure. Think outside the box. Spend your free time wisely if it's what you feel you must do to replace a feeling you have inside. As if God's trying to knock on your door and tell you something. First off, listen to that knocking that is happening in your life. In order to do this one must stop all of the mind chatter and stop all busy activity and then you will hear this. I guarantee if you open the door he's been knocking on you might just learn something about yourself that you never knew existed. That might change your life forever is all I'm saying. Stop listening to others who only care about themselves which doesn't help you in the least. Replace your own will with God's will and see how the results if anything won't hurt you instead could change things forever. Hell, heaven or earth? Where are you? You decide.

Promote Your Page Too